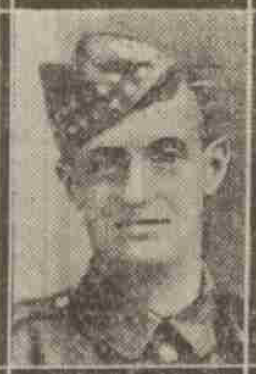 Private James P. Lorimer, Royal Scots, missing since 20th September, 1917.  He was formerly employed as a plumber with the Dundee Corporation.  Information will be welcomed by his parents, Mr and Mrs George S. Lorimer, 11 Bath Street, Broughty Ferry.

Private James Peddie. Lorimer, Royal Scots, reported missing on 26th September, is now presumed to have been killed.  He is a son of Mr George Lorimer, Bath Street, Broughty Ferry.  Private Peddie was a plumber with the Dundee Corporation prior to enlistment.  A brother is serving with the R.A.F. in Egypt.

Can you tell us more about James Peddie Lorimer'? Some additional facts, a small story handed down through the family or perhaps a picture or an heirloom you can share online. Contact our curator...