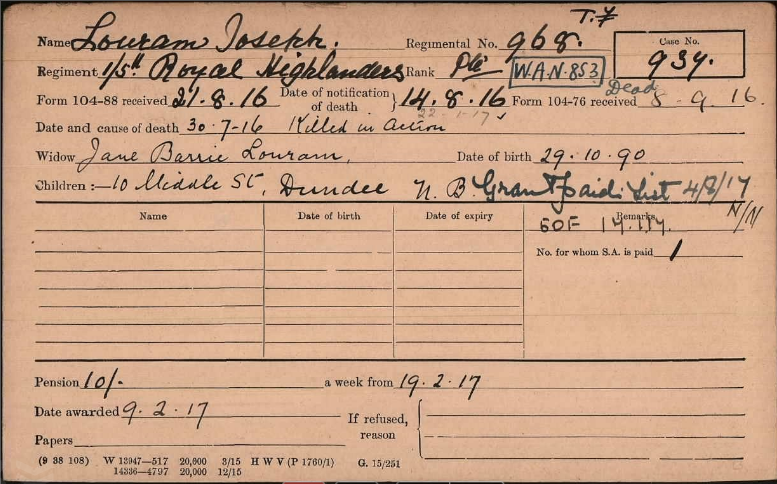 KILLED AFTER BEING TWICE WOUNDED.

Private Joseph Louran, who was 28 years of age, had had a long association with the Volunteer and Territorial movements.  He became associated with the Volunteers when quite a lad, and on the disbandment of that organisation transferred into the Territorials.  His association with these movements embraced a period of fully twelve years, and during that time he maintained a keen interest in military work.  He was a well-known and popular figure in Territorial circles.

It is over a year and a half since Private Louran went on active service, and in the interval between then and the time of his death he had been twice wounded.  On the second occasion on which he was wounded he was sent home, but returned to the front in January of this year.  His platoon officer, writing to the deceased’s wife, states that Private Louran “died as a soldier should, with his rifle in his hand and facing the enemy.”

Deceased is survived by a widow and young child, who reside at 10 Middle Street.  A brother-in-law, who was in the Royal Scots, has also made the supreme sacrifice.

Can you tell us more about Joseph Louran'? Some additional facts, a small story handed down through the family or perhaps a picture or an heirloom you can share online. Contact our curator...