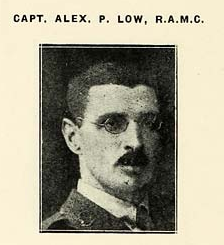 Captain Alexander Petrie Low of the Royal Army Medical Corps was attached to the 7th Bn of the Seaforth Highlanders when he was killed by a shell in the advance at Longueval and Delville Wood.

Alexander was educated at Arbroath High School and Edinburgh University where he qualified in 1896. After holding appointments at Dundee Royal Infirmary and Craiglockharts Poor House he took up practice in Dundee. He Joined RAMC (T.F.) in 1912 and was mobilized for war in September 1914.

For the first year he acted as Surgeon to 1st Scottish General Hospital, Aberdeen. He went to France in 1915 and served with No 51 (Highland) Casualty Clearing Station and No 30 Casualty Clearing Station before finally becoming the Medical officer to the 7th Battalion, Seaforth Highlanders. On the day he died the regiment started to advance to Longuval and Delville Wood. his Lieutenant Colonel stated that Alexander had joined the men who fought through to Longuval about an hour after it was taken and said “We were struck with his sense of duty in following so soon. The shelling at the time was heavy.” Alexander was killed by a direct hit from a shell. A private serving in the Seaforths recorded “He walked about from one wounded man to another with the utmost coolness. He was with us in the front line when one shell wounded several of us, and if anybody showed bravery and coolness it was Captain Low. There was a quiet nobility in the way he did what he would have said was only his duty, that one was forced to wonder at it even in the heat of action.” Arbroath Roll of Honour page 58.

HOW A DUNDEE DOCTOR DIED.

A letter from a private in the Seaforths who was wounded in the great attack of July 14th tells how Dr A. P. Low, of the R.A.M.C., Dundee, was killed.  He writes from a hospital in Cheltenham:___

“We started to advance, with Longueval and Delville Woods for our objective, early on the morning of July 14th.  I saw Captain Low working his way up towards us.  He walked about from one wounded man to another, attending to them with utmost coolness.  He was with us in the front line when word came for us to take a portion of the wood.  We were moving off when I was struck with shrapnel.  The one shell wounded several of us, and we were quickly attended to, as the doctor was within six yards of us.  Indeed, I remarked to the man who dressed me that I thought if anybody had shown outstanding bravery and coolness it was Captain Low.  As I left to make my way back, I saw him gathering his appliances together and following on behind the company.  A comrade whom I was on the hospital ship with told me of Captain Low’s death.  He was in an old trench on the right of Delville Woods attending some wounded when he was hit directly on the head with a shell.  He was of course, killed instantaneously.  I am perfectly sure that all who saw him that day will say with me that he was a very gallant gentleman.  There was a quiet nobility in the way he did what he would have said was only his duty, that one was forced to wonder at it even in heat of action.”

In another letter received from the Lieutenant-Colonel Commanding the Seaforths it is said:__”We buried him two days afterwards just south of the village of Longueval, in a very suitable place, and two officers of the Black watch are buried near him.  The grave is marked with a wooden cross, which we were able to erect at the time.”  Mentioning the fact that Captain Low joined the men who fought through to Longueval about an hour after it was taken, the officer adds:__”We were each struck with his pluck and sense of duty in following so soon.  The shelling at the time was very heavy.  He was very brave, and seemed to actually enjoy the experience.”

Can you tell us more about Alexander Petrie Low'? Some additional facts, a small story handed down through the family or perhaps a picture or an heirloom you can share online. Contact our curator...