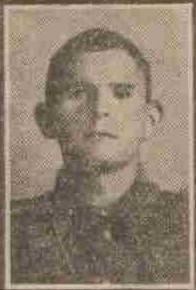 Private David Low, Royal Scots Fusiliers was a son of Mr and Mrs James Low, 60 North William Street.  His brother Robert was killed on 13th April.  He had been in France eleven months.  Prior to enlisting he was a foundry labourer.

Can you tell us more about David Low'? Some additional facts, a small story handed down through the family or perhaps a picture or an heirloom you can share online. Contact our curator...