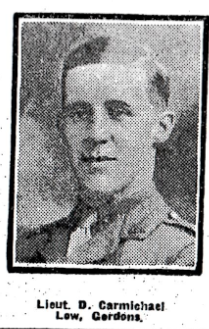 The inhabitants of Monifieth are now realising that the war is levying a heavy toll of the very best of the young manhood in the district. On Sunday last information was received that Lieut. David Carmichael Low, Gordon Highlanders, had made the supreme sacrifice at the front. The deceased officer is the younger son of Mr William Low, Seaview, Monifieth, and Balmakewan, Marykirk, Kincardineshire, senior partner in the firm of Messrs James F. Low & Coy., Engineers, Monifieth. He was born in Monifieth and received his education at Clifton College, Bristol, where he was finishing his course of studies when war broke out. Being a Lieut. in the Officers Training Corps in connection with the College, he received a commission in the 7th Gordons, and was stationed in Aberdeen during the period of training. He had only been a few weeks at the front when he fell in action on Tuesday, 18th July. Lieut. Low was a young man of great promise, and the news of the termination to his bright and hopeful career has made a painful impression amongst the people of Monifieth, who knew him so well.

Of an open, frank and cherry disposition, deceased leaves a wide circle of friends in Monifieth and district to mourn his loss. The sympathy of the neighbourhood will go out to Mr and Mrs Low and family in their great bereavement. Mr Low’s other son, Lieut. James Hubert Low, is also serving his King and Country in the Scottish Rifles.

Can you tell us more about David Carmichael Low'? Some additional facts, a small story handed down through the family or perhaps a picture or an heirloom you can share online. Contact our curator...