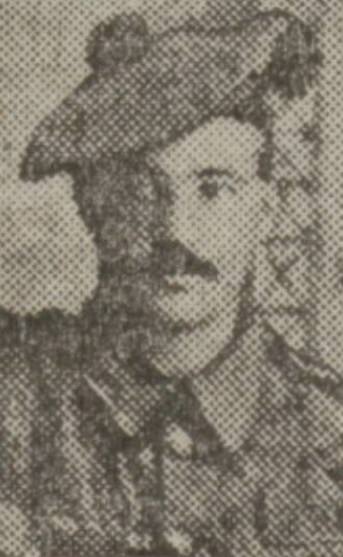 Edward has no known grave but is remembered on the Menin Gate Memorial.

On 31st July 1917, the 9th Black Watch, a new army battalion, attacked German positions in the vicinity of Frezenberg. The attack was launched at 3.50 a.m., and by 4.45 the battalion had taken its first objective, the Blue Line. By 5.15 the battalion was reorganised and continued its advance on the second objective, a road 300 yards east of Frezenberg village, reaching its final objective, the Green Line, 400 yards east of Frezenberg, at 6.30 a.m. German snipers on the Zonnebeke Road inflicted heavy casualties, while two German counter-attacks were driven back with severe loss.
The battalion held a particularly exposed position on the eastern slope of Frezenberg Ridge and the War Diary states: – ‘The shelling was very heavy, worse than any of us remember having received on the Somme, and this continued all day’.
During the fighting the Battalion lost heavily, 20 other ranks killed, 180 wounded and 45 reported missing, while one officer was killed, and 12 wounded.
3-88 C.S.M. Edward Low, was one of those killed, aged 31. A former millworker, Low’s wife and four children lived at 12 Parker Street, Dundee. He is commemorated on the Ypres (Menin Gate) Memorial, West-Vlaanderen, Belgium.

DUNDEE SERGEANT-MAJOR KILLED BY SHELL. Mrs Edward Low, 12 Parker St., Dundee, has been officially notified that her husband, Company Sergeant-Major Edward Low, Black Watch, was killed by the explosion of a shell on 31st July.
Sergt.-Major Low who was 31 years of age, was a reservist, and on the outbreak of hostilities was called up. He had seen two years of stiff fighting in France. Prior to enlistment he was employed as a millworker. He is survived by a widow and four of a family. The Courier, Tuesday, 21 August 1917, 3.

Can you tell us more about Edward Low'? Some additional facts, a small story handed down through the family or perhaps a picture or an heirloom you can share online. Contact our curator...