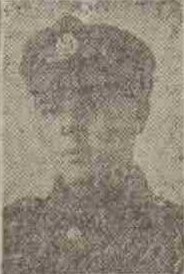 Private Harry Low, York and Lancaster Regiment, who died on Sept, 29 from wounds received in action two days previously, was a son of Mr and Mrs James Low, Trottick Mains, by Dundee, He had been one year and seven months in France, and was 27 years of age.  Two brothers have been wounded and another is serving on the Macedonian front.

Can you tell us more about Harry Low'? Some additional facts, a small story handed down through the family or perhaps a picture or an heirloom you can share online. Contact our curator...