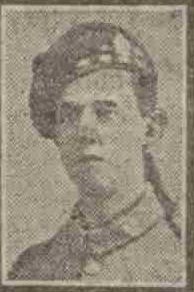 Pte. Norman J. Low, who died of wounds in Germany on 25th April, 1918, was the eldest son of Mr Geo. Low, coachbuilder, Nethergate, Dundee.  Deceased, who was only 19 years of age, enlisted in the Scottish Horse in March, 1917, and proceeded to France in October of the same year.  He was attached to the Gordon Highlanders, and saw much heavy fighting.  Pte. Low was captured on the 25th March 1918, during the initial stages of the German offensive.  He was a former pupil of the Dundee High School, and took a great interest in the school sport, occupying the post of vice-captain of the Rugby team.

Can you tell us more about Norman James Low'? Some additional facts, a small story handed down through the family or perhaps a picture or an heirloom you can share online. Contact our curator...