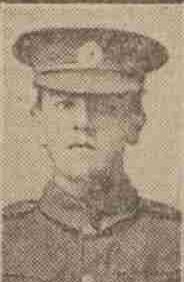 Intimation has been received that Sapper Peter Louden, Royal Engineers, youngest son of Mr James Louden, 96 Strathmartine Road, was killed on the 20th of this month.  Sapper Louden, who is 24 years of age, enlisted in March, 1915, and had been in France for almost three years.  Prior to joining the forces he was employed as an apprentice engineer in Coldside Machine Works (Mr James Ferguson).  He was well known in local football circles, having played for Fairfield F. C.

Can you tell us more about Peter Louden'? Some additional facts, a small story handed down through the family or perhaps a picture or an heirloom you can share online. Contact our curator...