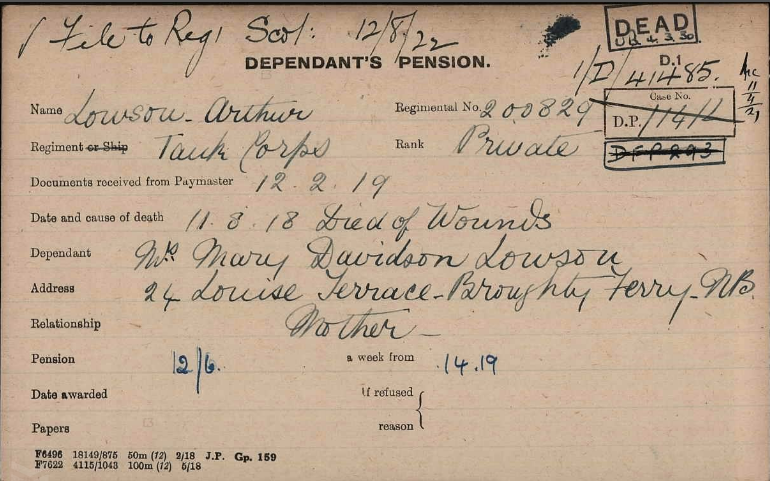 Arthur has no known grave but is remembered on the Vis-En-Artois Memorial and the Harris Academy, Dundee, Roll of Honour.

As a child Arthur was educated at Harris Academy, Dundee and then worked as a Clerk at James Robertson’s Jute Mill, Dundee, better known as the Logie Works.

He initially attested at Arbroath and joined the Machine Gun Corps (Motor’s) at Coventry 23 March 1916. He undertook his initial training as Bisley in Surrey. He was initially posted to ‘D’ Company, Heavy Section, Machine Gun Corps, and then undertook tank training at Elevden, Suffolk, before being deployed to France in early September 1916.

As a crew member of Tank D22, he was wounded at High Wood on 15 September 1916 after his tank had ditched. He was recommended for a gallantry award by his Skipper, Lt Eric Robertson, but this was not granted. He is believed to have been in action on 26 September 1916, between Courcelette and Martinpuich, when his tank was destroyed by German Artillery after trying to suppress an enemy trench. Following this he served on with the Tank Corps as a member of ‘D’ Company, 4th Battalion, Tank Corps.

By 30 July 1918 he was a crew member of Tank 9107, commanded by Lt M.D. Barden in ‘C’ Company. On the opening day of the Battle of Amiens (8 Aug 1918) his Company crossed the River Luce at Ignaucourt and reached their  final objective at 10:30am. The following day  at the request of the infantry they engaged the enemy at Vrely, where they put many machine and anti-tank guns out of action, when they ran out of ammunition they then retired.

As a group of eight tanks in action on 11 August 1918, Arthur was initially reported missing. When his body could not be found he was determined to have died as a result of wounds or killed in action on 11.08.1918, near Parvillers le Quesnoy.

Can you tell us more about Arthur Lowson'? Some additional facts, a small story handed down through the family or perhaps a picture or an heirloom you can share online. Contact our curator...