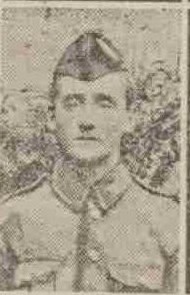 Patrick has no known grave but is remembered on the Menin Gate Memorial.

DUNDEE SOLDIERS KILLED IN THE TRENCHES.

Dundee’s roll of her sons who have died for their King and country is daily increased.  Information reached the city yesterday of the death of Private Patrick Lynch, H.L.I., and Private John M. Barnett, of the 2nd Black Watch.

Private Lynch was the only son of Mrs Lynch, 20 Hilltown, and news of his death was contained in a letter from Private J. Ward, of the same company, to the widowed mother.  The communication stated :___”Deeply regret that Patrick met his death to-day, 17th October, by shell fire.  I was wounded myself at the same time.  His death was instantaneous, and he met it doing his duty as a soldier in the trenches.”  In his last letter home to his mother Patrick expressed that he would be back to Bonnie Scotland before the New Year.  Prior to joining the colours Private Lynch, who would have been 21 years on Christmas Day, was a millworker with Messrs Don & Duncan.

Can you tell us more about Patrick Lynch? Some additional facts, a small story handed down through the family or perhaps a picture or an heirloom you can share online. Contact our curator...