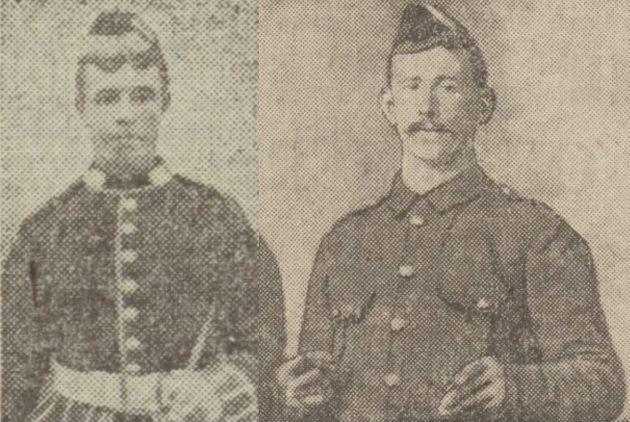 On 29 June 1915, two of Dundee’s Own were killed when a German shell landed in a dug-out the men were occupying. 1864 Pte. Daniel Kelly was a native of Port Glasgow, but was a residing at St Mary Street at the time of his death. News of his death appeared in the ‘The Telegraph on 8 July.

4th BLACK WATCH MEN KILLED IN “DUG-OUT” BY GERMAN SHELL. Private Daniel Kelly, 4th Black Watch, whose home was at 36 St Mary Street, Dundee has been killed in a “dug-out” by an enemy shell.

The second soldier to lose his life was 2881 Pte. Albert Lyon, son of John Lyon, 2 Park Lane. An obituary appeared in ‘The Courier’ on 12 July.

DUNDEE TERRITORIAL KILLED BY SHELL. Private A. Lyon, of the 4th Black Watch, has fallen a victim o a German shell. Mrs Lyon, who resides at 164 Overgate, Dundee, has received a letter from Captain R. N. M’Intyre, 4th Black Watch, intimating her husband’s death.
Private Lyon was 32 years of age, and enlisted in the “Fourth” on the outbreak of the war. He was previously employed as a carter by David A. Jobson, Guthrie Street. The Courier, Monday, 12 July 1915, 4.

Can you tell us more about Albert Lyon? Some additional facts, a small story handed down through the family or perhaps a picture or an heirloom you can share online. Contact our curator...