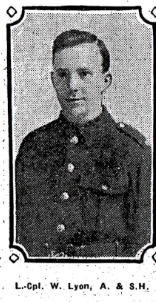 Lance-Corpl. Wm. Lyon, Argyll and Sutherland Highlanders, killed in action on 13th Oct., leaves a widow and one child, who reside at 69 North Wellington Street.  Deceased, who was 23 years of age, enlisted in March, 1916, and three months later was sent to France, where he had been ever since, and had seen much severe fighting.  He had been wounded three times and gassed once, while he had also suffered from shell shock.  Previous to enlistment he was a tenter in Ancrum Works, Lochee.

Can you tell us more about William Lyon'? Some additional facts, a small story handed down through the family or perhaps a picture or an heirloom you can share online. Contact our curator...