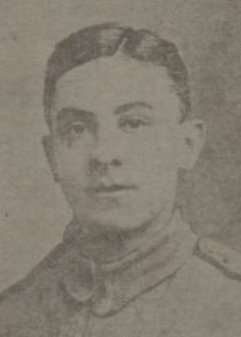 Alfred was a former pupil of Grove Academy, Broughty Ferry and is remembered on the Schools War Memorial.

News reached Mr Wm. Mackay, West Ferry Station, yesterday that his only son, Corporal Alfred Mackay. R.G.A., had been killed in action.  Corporal Mackay joined the literary staff of the “Courier” in 1911, subsequently becoming a sub-editor of the “Weekly News.”  He enlisted in Kitchener’s Army in 1915, and had been through much heavy fighting at the front.  He was recently home on furlough.  Corporal Mackay was a keen sportsman, and was well known as a footballer and cricketer in Broughty Ferry.  He was of a very genial disposition, and his death will be deeply regretted by a wide circle of friends.

Can you tell us more about Alfred Annandale Mackay'? Some additional facts, a small story handed down through the family or perhaps a picture or an heirloom you can share online. Contact our curator...