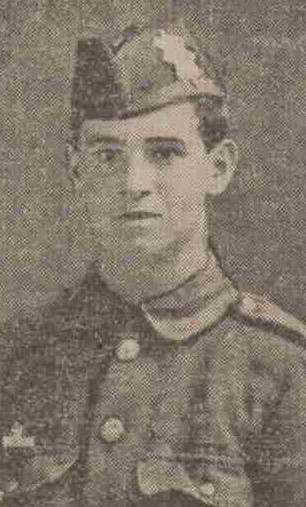 Adam has no known grave but is remembered on the Loos Memorial. His surname is recorded as Mackay on the original Dundee Roll of Honour.

Private Adam McKay, who resided with his married sister, Mrs White, 10 Rosebery Street, Dundee, is reported missing since September 25.  He was in the same company as his brother, Sergeant McKay.  In a letter Lieutenant R. C. Cunningham describes him as a “very brave boy,” and gives an illustration of Private McKay’s bravery, “Your young brother,” says the officer, “let me see how brave and gallant he was one day in the trenches about a fortnight before the battle.  A shell arrived inside our trench and killed two of my lance-corporals.  Just in the next traverse, ten yards away, your brother was on sentry duty looking at the enemy’s lines with his periscope.  After the shell had exploded he still went on looking with his periscope.  After I had reached the spot to find out what damage had been done,  I discovered him, and he coolly asked—-‘Shall I just carry on here, sir?’”

Prior to enlistment Private McKay was an employee of Macdonald & Gray, egg merchants, Ward Road.  He is 19 years of age.

Adams 3 brothers all served during the Great War and are all believed to have returned home safely. Robert was a Sergeant in the 4th Black Watch, George was a Private in the 8th Black Watch and Duncan was a Corporal with the 4th Black Watch. The 3 surviving brothers each have an entry in the returnee section of this Roll of Honour.

Can you tell us more about Adam Moir McKay? Some additional facts, a small story handed down through the family or perhaps a picture or an heirloom you can share online. Contact our curator...