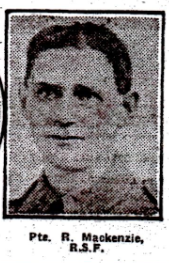 Private Robert McKenzie, Royal Scots Fusiliers, was the eldest son of Mr and Mrs MacKenzie, 2 City Road, Dundee.  He had been two years in France, and had been through much severe fighting.  He was a mason in Civil life. Mr and Mrs MacKenzie have two sons still serving, John is in the Canadians, and was wounded some time ago, while James is serving in France.

Can you tell us more about Robert Mackenzie'? Some additional facts, a small story handed down through the family or perhaps a picture or an heirloom you can share online. Contact our curator...