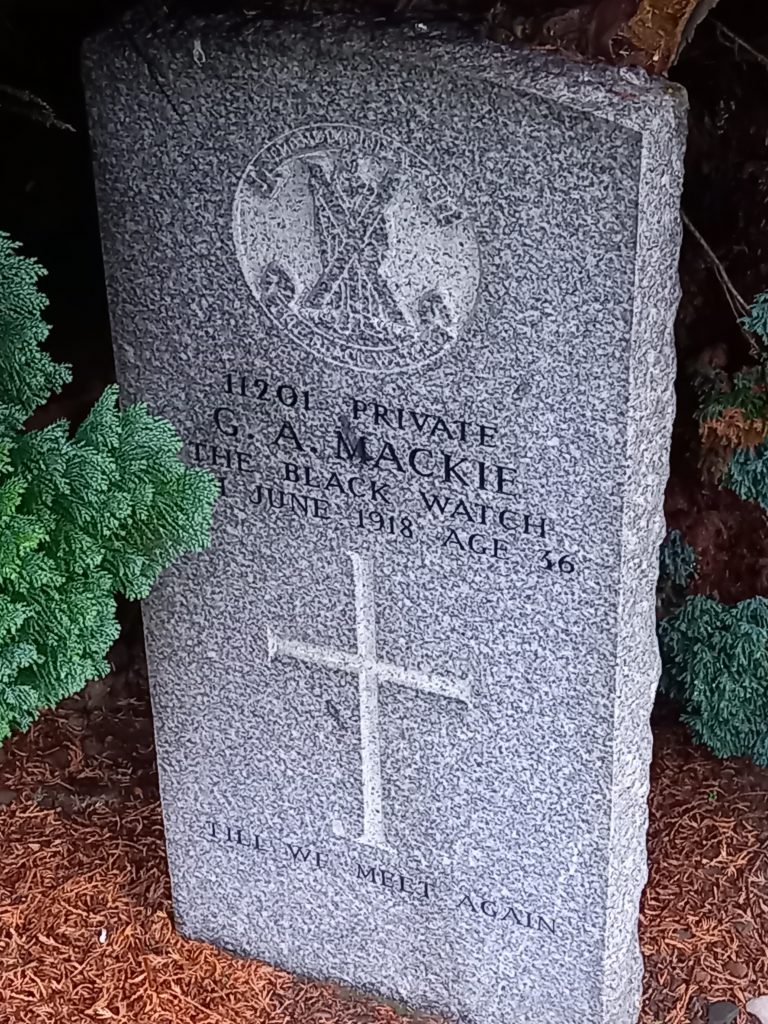 George was a Dundee man and enlisted in 1915.  He was born in Dundee in 1896  to parents James, a Stone Mason and mother, Florence Nightingale Tait Mackie nee Scrimgeour who was a weaver.

In the absence of a service record it has been very difficult to pull together a story of his war but there are at least some pertinent elements to his story.  We know from his Medal Index Card that he was enlisted in 1915 and discharged in November 1917 and that on discharge he was presented a SWB, Silver Wound Badge.  This appears to fit with his CWGC entry which suggests he “died of wounds” in 1918.  On the surface at least,  this might appear to be the basis of his story.

However,  there are contradictions which appear on further scrutiny of the very few pieces of ephemera which survive.  Firstly,  he has two Medal Index Cards,  one for his SWB and one for BVM and VM.  Neither of these specify a qualifying date with any of the Expeditionary Forces,  moreover such surviving ephemera lists him through 1915 to 1917 as serving in 3rd Bn Black Watch which did not leave UK.  These could be interpreted as him not having served in a War Theatre,  by no means authoritative but certainly a possibility.

What then of the died of wounds entry ?      Well,  the subjective “wound” could also be used to describe the consequences of injury or ailment attributable to service.  Often used this way in some pension records and such injuries or ailments qualify the individual for the SWB giving another possible link to The term “wound”

The facts we are confident of are firstly, that he died in the Dundee Royal Infirmary in June 1918 of Infective Arthritis of the Hip,  There is no mention of Sepsis but the term infective describing the arthritis would suggest this,  secondly he was discharged from the service no longer fit in November 1917  possibly due to pathology or injury to the hip,  thirdly after discharge he found some work as a flour Warehouseman before succumbing to his infective arthritis.

Other facts we can be sure of is that his marriage to Florence took place in January 1905 quickly followed by the birth of his son, also George Angus in July 1905 .  There was at least one other child,  Florence Nightingale Tait Mackie in 1913,  named in full after her mother.    At the time of George’s death the family were resident at 36 Wellington Street but hitherto had resided at various times at Ann Street,  Wellburn Street  and Hilltown.

Whether or not George was wounded or served in a War Theatre may not be able to be confirmed however it is largely irrelevant as the Hip Arthritis which caused his demise was the consequence of service and like all others who sacrificed he should be remembered..

Can you tell us more about George Angus Mackie'? Some additional facts, a small story handed down through the family or perhaps a picture or an heirloom you can share online. Contact our curator...