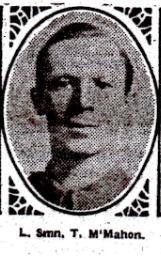 Mrs MacMahon,1 Union Place, Brook Street, Broughty Ferry, has received information that her husband, Leading Seaman Thos. MacMahon, of the Royal Naval Division, has been missing, since 13th November.  At the outbreak of war Leading Seaman MacMahon, was in the R.N.V.R., and was immediately called up.  He saw considerable service at the Dardanelles, and was wounded in action there.  On rejoining his unit he was attached to a machine gun section and sent out to the front.  Prior to the war he was employed as a plumber, and for some time was in Newport.  The missing seaman is 25 years of age.

Can you tell us more about Thomas Macmahon'? Some additional facts, a small story handed down through the family or perhaps a picture or an heirloom you can share online. Contact our curator...