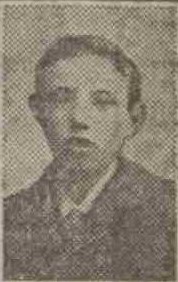 Alexander served as “Alexander Phillips” and was the son of Mr & Mrs Hugh Macmillan, 48 Hilltown, Dundee. His father served with the Royal Flying Corps during the war and returned home safely.

Although only nineteen years of age, Pte. Alex MacMillan, of the Royal Scots who was killed in action on Sunday, 21st ult., had been on active service in France for two and a half years.  When war broke out, young MacMillan gained admission to the army by overstating his age, and remained firm in his determination to stick to the service, although he might easily have had it otherwise.  “No, mother ; I want to go.” he said when it was suggested he was too young to enlist.  The gallant lad was the eldest son of Mrs Macmillan, 48 Hilltown, Dundee, and prior to enlistment he was a calender worker in the employment of Harry Walker & Sons, Ltd.

Sympathetic letters have been received by Mrs MacMillan from her deceased son’s regiment.  His company officer states that Pte. Macmillan was on sentry duty in the front line, and was instantaneously killed by a shell exploding on the parapet in front of him.  His platoon corporal wrote :–“Sandy was a very cheery chap, and very well liked by everyone.  We miss him very much.”

Can you tell us more about Alexander Phillips Macmillan'? Some additional facts, a small story handed down through the family or perhaps a picture or an heirloom you can share online. Contact our curator...