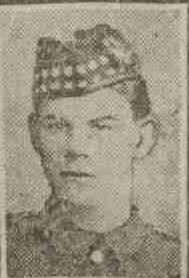 Private James Malcolm  M.M. Seaforth Highlanders, son of Mr and Mrs James Malcolm, 2 Rosefield Street, has been killed in action. Private Malcolm, who was 21 years of age, enlisted over three years ago, and he had been in France for almost three years.  Nearly a year ago he was awarded the Military medal for conspicuous gallantry in action.

In a letter of condolence to his mother the officer commanding his company states :–“On behalf of the officers, n.c.o.s, and men of the battalion, I wish to convey to you our heartfelt sympathy in your grievous loss.  Your son was a great favourite in the battalion, always cheery and bright, and ever ready to help his comrades.  As a soldier none could excel him for bravery and devotion to duty, and I looked to him as one of the mainstays of the company.  James died the death of a brave soldier, doing his duty for King and country.  You may find some consolation in the fact that he died without suffering ant pain, and when he died he was busy dressing a comrade of his who had been badly wounded.”

Before enlisting deceased was a turner in the Corporation Electricity Works.  His brother William, who was in the R.E., has been discharged.

Can you tell us more about James Malcolm'? Some additional facts, a small story handed down through the family or perhaps a picture or an heirloom you can share online. Contact our curator...