We need you to tell us more about the life and times of Christopher L. Marshall 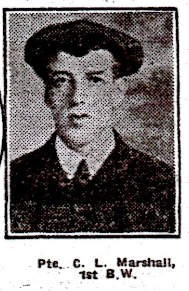 Christopher has no known grave but is remembered on the La Ferte Memorial. He was the brother of Pte Robert Marshall, 1183, Black Watch, who died from wounds and asthma, 16.02.1919.

AND BROTHER IN SAME REGIMENT IS WOUNDED.

Private Christopher L. Marshall, a Dundee member of the 1st Black Watch, has fallen on the field of battle.

His mother, Mrs Andrew Marshall, a widow, residing at 23 Todburn Lane, has received official intimation that he was killed in action on the 15th inst.  Private Marshall, whose photograph we reproduce, had been eight years in the army, serving in the South African war, and was thirty-three years of age, having been married three years ago.  The young couple took up house at 64 Hilltown, where his widow now resides.

But the toll of the war exacted from Mrs Marshall does not end here.  Another son, Robert, a private in the same regiment as his brother, has been wounded.

Private Robert Marshall, who is only twenty-five years of age, has been three weeks in hospital at Chatham, but now sends cheering news to his mother.

A telegram from him is in the following terms :–“I am progressing favourably.  Hoping you are keeping well.–Bob.”

This younger son, who has been training for the last seven years with his regiment, was expected home on furlough in July last, but the war of course rudely shattered all such hopes.  Before joining the colours Private Marshall was employed in a Dundee calendaring establishment.

Can you tell us more about Christopher L. Marshall'? Some additional facts, a small story handed down through the family or perhaps a picture or an heirloom you can share online. Contact our curator...