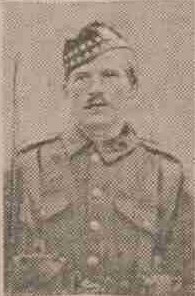 Mrs Martin, who resides at 54 Princes Street, Dundee, has received official notification from the War Office that her son, Private Alex Martin, of the Royal Scots, was killed in action on 19th August.  Previous to enlistment in May last year Private Martin was employed by the Trades Lane Calendering Company, Limited, Dundee.  Mrs Martin has three sons still serving in the Royal Scots, one of whom is at the front, while the other two are training at home.

Can you tell us more about Alexander Martin'? Some additional facts, a small story handed down through the family or perhaps a picture or an heirloom you can share online. Contact our curator...