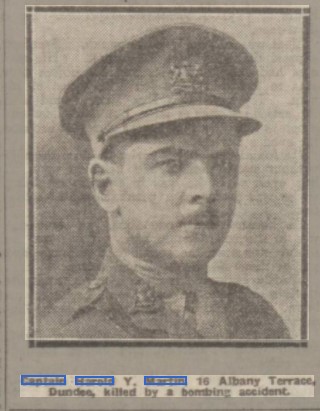 DUNDEE OFFICER KILLED BY A BOMB.

The death has occurred as the result of a bombing accident in the south of England, of Captain Harold Y. Martin, Manchester Regiment, youngest son of the late Mr William Martin, 16 Albany Terrace, Dundee.

Captain Martin enlisted two years ago at the age of 17, and received a commission in the Manchester Regiment.  Latterly he had been acting as a bombing instructor and recently received his captaincy.  He was a former pupil of the Dundee High School, and before enlisting was in the office of Messrs A. & S. Henry & Co.

His brother, Captain Frank Martin has been serving with the troops in East Africa for 2½ years.

Can you tell us more about Harold Young Martin'? Some additional facts, a small story handed down through the family or perhaps a picture or an heirloom you can share online. Contact our curator...