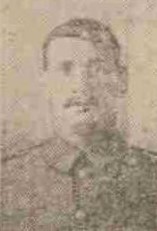 DUNDEE SOLDIERS WHO HAVE FALLEN.

Lance-Corpl. James Buick Martin, of the East Kent Regiment, who has been at the front since hostilities opened, has been killed.

His wife, who resides at 13 Arthur Street, Dundee, received intimation yesterday that her husband had been killed in action.  Deceased was a reservist, having previously served almost 14 years in the army, and prior to being called up was employed as a jute batcher in Walton Works.  He went out with the first Expeditionary Force, and had fought valiantly until laid low by an enemy bullet.  He was 35 years of age, and is survived by a widow and one son.  A brother is in the 14th Hussars, while Mrs Martin has three brothers serving with the colours.

Can you tell us more about James Buick Martin'? Some additional facts, a small story handed down through the family or perhaps a picture or an heirloom you can share online. Contact our curator...