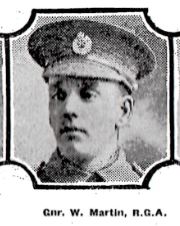 William initially served with the Royal Engineers before being tranffered to the R.G.A. in March 1918. He was the brother of Pte David Leighton Martin, 135782, 52nd Battalion, Canadian Infantry, who was killed in action 21.09.1916.

Pte. Wm. Martin, a son of Mr William Martin, 509 Strathmartine Road, Downfield, has died from wounds at a casualty clearing station in France.  He enlisted in October, 1915, in the Royal Engineers, but was transferred to R.G.A. in March this year.  Pte. Martin was formerly employed with the Dundee City Tramways as a conductor on the Downfield route.

This is the second loss sustained by Mr Martin, a younger son, David, of the Canadians, having been killed in France in September, 1916.  David, before going to Canada, was also employed as a conductor with the City Tramways on the Downfield route, and at the time of his enlistment he was employed with the Tramcar Corporation in Toronto.  He had been four months at the front.

Can you tell us more about William Martin'? Some additional facts, a small story handed down through the family or perhaps a picture or an heirloom you can share online. Contact our curator...