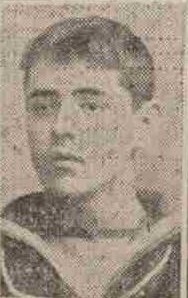 More about John May

John has no known grave but is remembered on the Portsmouth Naval Memorial. He was serving on H.M.S. Bulwark which was attached to the Channel Fleet, conducting patrols in the English Channel. On 26 November 1914 while anchored at Sheerness she was destroyed by a large internal explosion with the loss of 736 men. There were only 14 survivors of the explosion and of these, 2 died later in Hospital. The explosion was believed to have been caused by the overheating of Cordite charges that had been placed adjacent to a boiler room bulkhead.

Another Dundee man lost his life in the Bulwark disaster.

Mrs John May, Hunter Street, has received intimation that her husband was killed in the explosion on board the battleship at Sheerness.  May, who was 36 years of age, was a reservist, and reported himself for his training period three days before war was declared.  He held the rank of chief stoker.  For the past four years he was fireman at Anchor Works.

Tragedy has followed tragedy in this home circle.  About a fortnight ago Mrs Harrison learned that her brother John May, a leading stoker on H.M.S. Bulwark, had lost his life when that vessel was wrecked by an explosion. May, who was also a reservist, and was employed as a fireman in Anchor Works (Messrs D. M’Master & Co.).  His wife, who resides in Hunter Street, has three young children–one boy and two girls.  This double blow has made the families the object of considerable sympathy in the neighbourhood.

Can you tell us more about John May'? Some additional facts, a small story handed down through the family or perhaps a picture or an heirloom you can share online. Contact our curator...