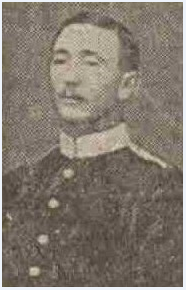 A Dundee family has indeed been hard hit by the war.  One of the sons has died of wounds while other two are prisoners.  All belonged to the same Regiment, –the 1st H.L.I.

The parents of the three men reside at 54 Watson’s Lane.  Pte. James M’Adams died from wounds in the chest on 17th February.  He was 29 years of age, was unmarried, and had served seven years with the H.L.I.

Mrs M’Adams has other two sons in the forces, who have not yet been in action, both having enlisted since the outbreak of hostilities.  John, who is 38 years of age and is married, joined the Royal Engineers.  Previous to enlisting he was employed in Barrow-in-Furness, and his wife is now residing with his parents.

The wife of Joseph, who enlisted in the Royal Irish Fusiliers, resides at 16 Nelson Street.

Can you tell us more about James McAdams'? Some additional facts, a small story handed down through the family or perhaps a picture or an heirloom you can share online. Contact our curator...