We need you to tell us more about the life and times of Duncan McT. McAinsh 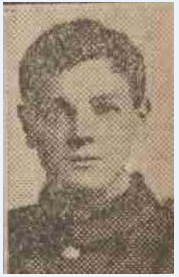 Private Duncan M’Ainsh, who was killed in action on 26th December, was a son of the late Mr Duncan M’Ainsh, boxmaker, Step Row, Dundee.  Deceased joined the Royal Scots in April, 1915, and was nearly two years at the front.  He was wounded, but returned to the front on 7th Dec.

Can you tell us more about Duncan McT. McAinsh? Some additional facts, a small story handed down through the family or perhaps a picture or an heirloom you can share online. Contact our curator...