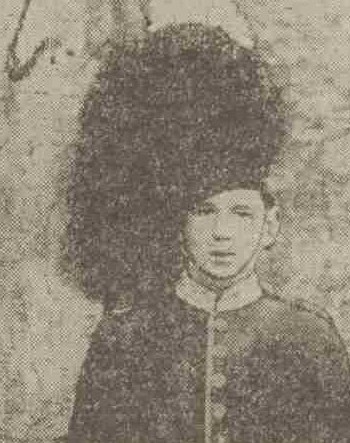 David has no known grave but is remembered on the Basra Memorial. This man is listed as MACARTHUR on the original Dundee Roll of Honour, but listed as McARTHUR on C.W.G.C.

Private David McArthur, of the Seaforth Highlanders, a gallant Dundee soldier who had seen a lot of service in the present war, and whose bravery had earned for him the Distinguished Conduct Medal, has been killed in action.

Official intimation of his death has been received by his mother, who resides at 41 North Street.  Twenty-nine years of age, Private McArthur was called to the colours as a reservist when war broke out.  He was a tenter in the employment of Baxter Bros. & Co., Ltd.  Out with the first of our fighting men, he was wounded before the close of 1914, and on recovering he returned to the fighting line.  He was wounded again on 9th May, 1915, and his courageous conduct on the field that memorable day was rewarded by the D.C.M.

Once more the gallant soldier regained his fitness and went back to his regiment, but now, unfortunately, he has received the fatal wound.  Private M’Arthur’s three brothers are with the colours,  Sergeant Thomas M’Arthur, R.F.A., and Gunner William M’Arthur, R.G.A., are both at the front, while James is training with the R.F.A. in England.

Can you tell us more about David Macarthur/McArthur'? Some additional facts, a small story handed down through the family or perhaps a picture or an heirloom you can share online. Contact our curator...