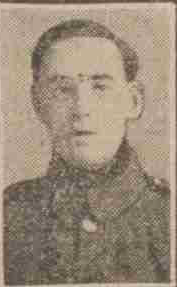 In a letter to Mrs M’Aulay his officer says :___”When his battalion was going up to the trenches on Friday, the 12 inst., your husband and three others were killed instantly by shell fire.  Their bodies were brought back and buried in a cemetery behind our lines.  With sincere sympathy from the battalion, and commending you to the care and comfort of God in your great loss.”

Private M’Aulay, who had been in France six months, joined the army shortly after the outbreak of war, prior to which he was working in Balgay Works, Dundee.  A brother of Mrs M’Aulay’s who is left with one child, was killed early in the war.

Can you tell us more about James McAulay'? Some additional facts, a small story handed down through the family or perhaps a picture or an heirloom you can share online. Contact our curator...