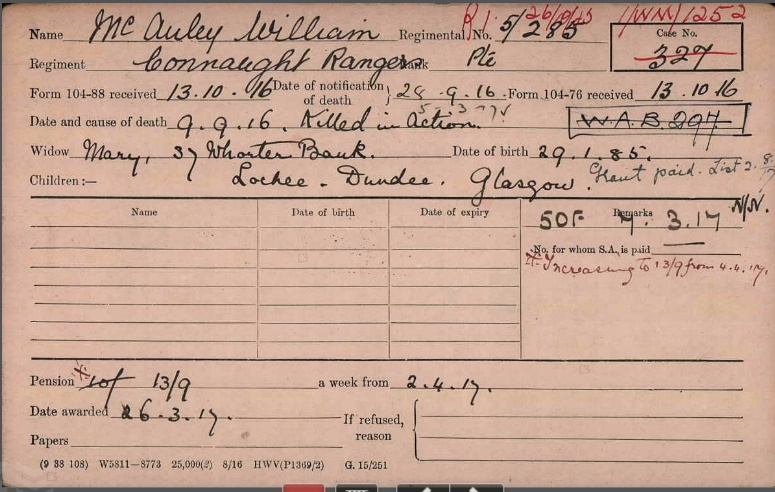 5/285 William McAuley 6 Bn Connaught Rangers
Yet another example where the absence of an accessible service record presents challenges in research a story.
William was a Glasgow born man and was said to be residing in Glasgow before his enlistment and working as a steel polisher,  specifically residing at 42 Provanhill Street in Glasgow in 1912.   He was a married man,  married to Mary McAuley, (nee Fisher also a native of Glasgow),  said to be resident at the same address in Glasgow.  They were married at St Roch’s RC Chapel on 11 June 1912 just a few hundred yards from where they lived.   Given these very brief items of information you could be forgiven for questioning a link to Dundee and his entry on the Great War Dundee Roll of Honour.  However,  a wee bit more research reveals that prior to their marriage in June of 1912 Mary Fisher was resident in Dundee at the time of the 1911 census at 38 Whorterbank,  Lochee resident with a widow,  her daughter and grandchildren,  The widow being a Margaret McAuley said on the Census to have been born in Glasgow,  Coincidence ??? or is this a relative of William’s who Mary was to wed the following year ???
On the register entry for her marraige to William in 1912 Mary is noted to be a Jute Factory Worker,  suggestive of a continuing link to Dundee and this is reinforced by the fact that on award of pension following William being Killed in Action she is recorded as resident at 37 Whorterbank Lochee.
Given these facts might it be reasonable to suggest that sometime after their marriage William might have been resident with Mary in Whorterbank Dundee ???  In the absence of a service record specifying where he enlisted and what address he will have furnished it is difficult to do other than speculate
What then of what we might be able to know of his service history.   Well we can weld together some known facts,  Firstly William enlisted to the 5th (Service) Bn Connaught Rangers with the service number 5/ 285.   The prefix 5 supporting that he enlisted directly to the “Kitchener New Army”  Bn rather than a reservist or Regular soldier.   Hence he was a Kitchener Volunteer.  The 5th Bn was destined for the Middle East Theatre and on 9 July 1915 the Bn embarked for Gallipoli landing on 5th August at the infamous Anzac Cove.  William’s service in the ill fated Gallipoli campaign was extremely short as he is recorded as being wounded in September 1915 and evacuated to UK for treatment of his wounds.  Regrettably we have no details of his wounding or treatment but we can surmise that after a due period of successful treatment and convalescence he is again fit for War Service
Being again fit he will have been returned to the Regimental Depot in Cork and from there is now posted to join the 6th(Service) Bn Connaught Rangers which lands in France on 18 December 1915.  It is not clear is William arrives with the Bn or is posted to them after their arrival in the BEF although we  are aware that the Bn saw action in France in March 1916 with the significant action at Guillemont on the Somme in September 1916 where over a series of just 5 days the Bn suffered casualties to the extent of 23 Officers and 407 Men William being amongst those  Killed in Action on 9th September 1916
With no Known grave William is commemorated on the Thiepval Memorial to the Missing of the Somme and on the Online Somme Roll of Honour.  Perhaps not strictly speaking a Dundee man,  he none the less would appear to have links to the city

Can you tell us more about William McAuley'? Some additional facts, a small story handed down through the family or perhaps a picture or an heirloom you can share online. Contact our curator...