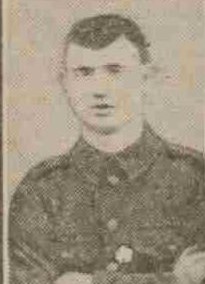 WHILE ON A DANGEROUS ROAD.

Driver Alexander M’Bain, of the Royal Engineers, the eldest of three Dundee brothers in the service of the army, has been killed through being struck by a piece of shell.

Deceased parents, who reside at 44 Constable Street, have been informed of the death of their son by receipt of a letter from Sergeant E. Anderson, 7th Signal Company R.E., and the latter pays a warm tribute to the late member of his section.

The sergeant writes :–“It is with deepest regret that I have to inform you of the death of your Alec, which occurred on the afternoon of 26th July.  As his section sergeant, I have had him working directly under me since the division came out to the front, and I was with him at the time of his death.  Your son was the lead driver of a wagon, and we were recommencing work after having had lunch, when, on proceeding along a road which was rather dangerous, Alec was struck by a portion of a shell.  A horse was also killed, and other three of the men wounded, but the remainder of us escaped.

“I lifted your son from his seat and carried him off the road.  He became unconscious shortly afterwards, and only lived about fifteen minutes.  We buried him in the evening in a little cemetery at a place near Veille Chapelle, and you can rest assured that he has a proper grave, which will be attended to.  The burial service was conducted by the principal Presbyterian chaplain, your son’s section comrades being present.  We are deeply grieved at the loss of your son, for by his death we have lost a brave and honourable comrade, and one who was never afraid of any danger.  He died a gallant soldier, honoured and respected by all who knew him.  If at any time we have an opportunity to get a photograph of his grave it will be done and sent on to you.”

Deceased was 24 years of age.  After having been four years in the Special Reserve Battalion of the Black Watch, he threw in his lot with the Royal Engineers.  Previous to proceeding to the front he had been for two years with his division in South Africa.  Another brother, John, is also on active service in the Royal Engineers, while Tom, who was wounded in the ranks of the 4th Black Watch at Neuve Chapelle, is still confined to hospital at Pontefract.

Can you tell us more about Alexander McBain'? Some additional facts, a small story handed down through the family or perhaps a picture or an heirloom you can share online. Contact our curator...