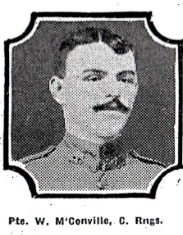 Hero of Many Battles.

Private William McConville, who has died from wounds, had seen much fighting.  He was wounded at Mons, and gassed at Hill 60 on 19th May last.

William is another of those Dundee men where the Service Record is amongst those lost and not available to scrutinise,  yet there are some interesting aspects which afford us the opportunity to build something of his story.

By scouring round various authoritative sources we can see that William was indeed Dundee born having be born to Parents John,  a labourer, and mother Louise at 116 Blackness Road Dundee on 1st November 1883.  McConville is another of those Names steeped in Irish origins and indeed a name now known to be reasonably common in and around Dundee.  However it seems that whilst John McConville, (Williams father),  was born in Dundee his Mother Louisa appears to have possibly originated in England.   Census records show the family living at Johnstone Lane, Scouringburn in 1901 and Lyons Close in 1911,  William being present at both Census date, along with both parents and 11 siblings by 1911,  (6 Sisters, 1 Brother and William).  Throughout this time John,  William’s father is a Shipyard Labourer in Dundee.

What then of John’s service history and the fact that the service record is absent ?   Does that mean we have little to go on ?  Actually,  we can piece together a reasonably authoritative service history albeit with a couple of aspects which are unable to be fully clarified.   But then,   that is the interesting feature of researching the stories of men such as William.

What can be said authoritatively is that William had a history of being a regular soldier with the Connaught Rangers,  much like contemporaries James Handy DCM and Thomas Flood who’s stories we have told previously and both of whom also hailed from the Lochee area of Dundee.  William’s service number of 7560 related to a Regular Army enlistment in 1903 which would have afforded him serving 4 years with the Colours and the remainder on the reserve.  This dovetails nicely with the fact that William is documented as having been wounded at the Retreat from Mons in late August 1914 and is evacuated to 1st Southern General Hospital in Birmingham for treatment of his wounds.  The only Connaught Rangers Bn then,  (Aug 1914 and the Retreat from Mons),  in the BEF was the 2nd Bn Connaught Rangers the Regular Army Bn previously stationed in Aldershot and to which William as an ex regular called up from Reserve would have been posted to  Moreover his Medal Index Card affirms he was with 2nd Connaught Rangers and entered France and Flanders on 14 August 1914

The next points in his service career able to be sourced via very limited casualty records is the reference to is being a Gas casualty at Hill 60 whilst Gas was certainly used here by the Germans.  Unfortunately this is where there is some confusion.  Having been wounded and back in UK it is eminently possible that he would be back in the field by May 1915 although by that time the 2nd Connaughts had been absorbed by the 1st Bn and 2nd was no longer in existence.   More importantly there is no record of any Connaught Bn at Hill 60 on the Western Front in the May 1915 Battle for Hill 60.  The 1st Bn had been at 2nd Ypres from 26th April and had been subjected to Gas.  In May of 1915 the 1st Connaughts were in the general area of Neuve Chappelle and moving forward a year to 1916 the 1st Bn were by then in Mesopotamia whilst the 6th Bn having come out to the BEF in December 1915 were by May on the Loos battlefield ,  trench fighting over some of the same ground fought over at Loos the previous year and by August they were moved South to the Somme

There seems little doubt that William did in fact suffer as a Gas casualty but the date and location remains a mystery it might be Hill 60 Ypres but he would have to have been attached to a different regiment,  it is possible it was with the 1st Bn at 2nd Ypres,  It might have been in the area of Neuve Chappelle  or even later at the area of Loos,  (Noux les Mines),  with the 6th Bn in May 1916.  Without his service record it is not possible at this stage to do other than speculate. Such then is the first aspect which lacks clarification,   What then of the Second aspect ?

Well we know that William met his end around the Guillemont area of the Somme on 4th September 1916 where he is said to have died of wounds.  The 6th Bn had been in the trenches in front of Guillemont from 31 Aug and were part of the attack and capture of Guillemont on 3 Sept as Corps Reserve Bn,  William dying of wounds the next day and interred in the CWGC Corbie Military Cemetery. In addition to his grave he is also commemorated on the Online Somme Roll of Honour which now brings us to that second aspect lacking clarification.  William’s Medal Index Card is annotated  “medals restored ACI 75 1921”  which was the Army Council Instruction published in 1921 which allowed for individuals medals previously forfeited to be restored.  This raises the question why were his medals forfeited ?  He was dead by the time the Medals were instituted which can only mean some default in his character or behaviour prior to his death resulted in forfeiture.   A mystery …………

Can you tell us more about William McConville'? Some additional facts, a small story handed down through the family or perhaps a picture or an heirloom you can share online. Contact our curator...