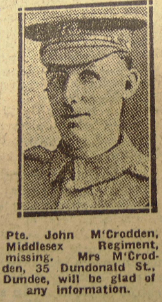 John’s story has some interesting tweaks to it.   Not Dundonian by birth but actually a Glasgow man who married  Ann Edgar Leighton in Dundee on 26 October 1912 and together they had a child Edgar L Alexander McCrodden who was born on 9 August 1913 and it is said they were residing at 35 Dundonald Street, Dundee when John enlisted on 1 March 1916 at the age of 27 years

It seems,  according to his enlistment papers,   that John was employed as a Baker but there is no obvious record as to where that might have been and  the first “tweak”  to consider is that on 1 March 1916 John is attested to the Middlesex Regiment at a  Liverpool recruiting office.    I can elicit no reason  why John might have been there unless travelling or for work,   but his wife and son were still in Dundee.  On 7th March his recruitment is fully approved at Mill Hill NW London and he moves into training with the Middlesex Regiment.

His records show he has never previously served militarily which is somewhat surprising as he is very quickly trained and posted to the BEF arriving at 33 Infantry Base Depot in France on 16 June 1917,   joining the 16th (Public Schools) Bn Middlesex Regiment in the field on 27th June 1916.

What may surprise some reading this who have been on our Battlefield Experiences,  is that this Bn served in 86 Brigade of 29 Division at Beaumont Hamel on 1 July 1916 .  That is,   if in Newfoundland Park today,   they would have been on the Left Flank assaulting towards Hawthorn Ridge,  (in direction of the blown mine) Left of where the Newfoundlanders,,  South Wales Borderers and Border Regiment  attacked which we cover on the experiences.  It is here that John was said to have met his end just a matter of a few hundred yards from other Dundee men in Border Regiment ,  KOSB and South Wales Borderers in the same Division who  were also lost that day

John’s body was not recovered and John is therefore remembered on Thiepval Memorial to the Missing of The Somme just a few miles up the road from where he fell.

Yet another man with links to Dundee who fell on this famous battlefield on the first day of the Battle of the Somme,  illustrating in part at least that Dundee’s losses on this battlefield were not limited to the famous 51st Highland Division’s eventual taking of this field on 13 November 1916.

Can you tell us more about John McCrodden'? Some additional facts, a small story handed down through the family or perhaps a picture or an heirloom you can share online. Contact our curator...