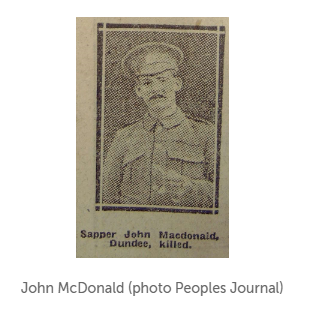 Sapper John Macdonald, Royal Engineers, 10 Hospital Wynd, Dundee, who has been at the front since the beginning of the war, has been killed in action.  His wife has received intimation that he was killed while engaged working in a sap.  Deceased, who was 46 years of age, was a slater to trade, and was the recipient of a public testimonial for bravery he displayed and the good work he accomplished in assisting at the Bond fire in the city.  He is survived by a widow and family.  He belonged to a patriotic family, as seven brothers were at one time serving with the colours.

This man is recorded as McDONALD on C.W.G.C.

Can you tell us more about John Maxwell McDonald'? Some additional facts, a small story handed down through the family or perhaps a picture or an heirloom you can share online. Contact our curator...