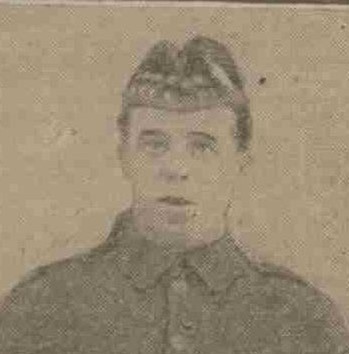 The death has occurred from wounds of Sergeant Arthur Michael McElhone, of the King’s Own Scottish Borderers, a son of Mr and Mrs Patrick McElhone, 2 Ogilvie’s Road, Dundee.  Sergeant McElhone, who was in his 28th year, was a reservist, and had served seven years abroad with his regiment.

When war broke out, he was employed as a postman in Dundee and Broughty Ferry, and he went to the front with the original British Expeditionary Force.  He was wounded at La Bassee, and after treatment at a London Hospital he spent a period of convalescence at Carnoustie, but with his fitness restored he quickly volunteered for a further spell of active service.  In the regiment Sergt. McElhone was a popular sportsman.  He was better known as Michael Hart, the name under which he enlisted, and on one occasion he reached the semi-final stage of the middle-weight boxing championship of the army in India.

Mr McElhone had a trying experience in connection with his son’s death.  On receipt of the intelligence that he was dangerously wounded the father made a hurried journey to the hospital in France where his son was lying, but unfortunately was too late to see him in life.  The gallant soldier was buried at half-past two o’clock on Friday, and his father did not arrive at the hospital until six hours later.

Can you tell us more about Arthur Michael McElhone? Some additional facts, a small story handed down through the family or perhaps a picture or an heirloom you can share online. Contact our curator...