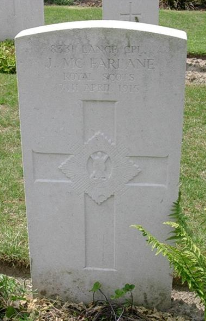 James M’Farlane, 2nd Royal Scots, was killed in action near Kemmel on 7th April.  He had served almost eight years with the colours, principally in India, and three days after the reserves were mobilised, he sailed for France.  He had passed through some stirring fights without receiving a scratch, and his letters to his wife, who lives at 64 Blackness Road, were always very cheery.  Deceased was 32 years of age.

Can you tell us more about James McFarlane'? Some additional facts, a small story handed down through the family or perhaps a picture or an heirloom you can share online. Contact our curator...