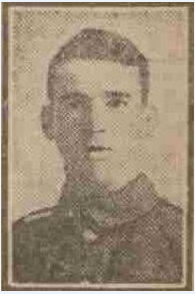 Lance-Corpl. Luke M’Gann, Scottish Rifles, whose wife resides at 22 Todburn Lane, Dundee, has been killed in action in France.

Lance-Corporal M’Gann, who was 28 years of age, went to the army two-and-a-half years ago, and three months later was sent to France.

In civil life he was employed as a jute batcher with Messes John N. Kyd & Co., Rashiewell Jute Mill.  His older brother, Private M’Gann, Black Watch, was killed in 1914.  A brother, James, is serving with the Scottish Rifles.

Can you tell us more about Luke McGann'? Some additional facts, a small story handed down through the family or perhaps a picture or an heirloom you can share online. Contact our curator...