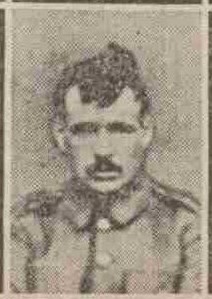 Patrick was the brother of L/Cpl Luke McGann, 24721, 10th Battalion, Cameronians (Scottish Rifles) who was killed in action 26.06.1918, his other brother James also served with the Cameronians and survived the war.

Another Dundee house mourns the loss of its breadwinner.

Information was received yesterday that Private Patrick M’Gann, of the 3d Black Watch had been killed in action on 30th October.  Five days previously his wife, who, along with her three young children, lives at 22 Todburn Lane, received a cheery letter from her husband, in which he stated that he was keeping well.  Private M’Gann, who was 27 years of age, was a reservist, and before rejoining the colours was working in Manhattan Works, Dundee.

Can you tell us more about Patrick McGann? Some additional facts, a small story handed down through the family or perhaps a picture or an heirloom you can share online. Contact our curator...