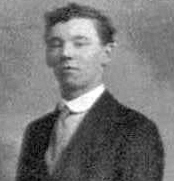 Official intimation has been received by Mr and Mrs Thomas McGow, 240 Perth Road, Dundee, that their son, Gunner Peter McGow, of the R.F.A., was killed in action on 30th October.  Gunner McGow, who had taken part in a lot of heavy fighting during the 18 months he was in France, had been twice wounded previously and recommended for the Military Medal.  He had recently been home on leave.

Gunner McGow served his apprenticeship as a basketmaker at the Royal Institution for the Blind. And had intended to enter his father’s business.  Mr and Mrs McGow have other two sons in the army, one a second-lieutenant in the Black Watch and the other in the Mechanical Transport.

Can you tell us more about Peter McGow'? Some additional facts, a small story handed down through the family or perhaps a picture or an heirloom you can share online. Contact our curator...