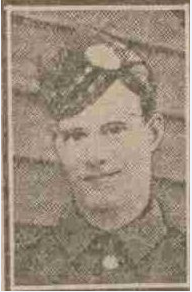 Alexander has no known grave but is remembered on the Arras Memorial.

Company-Sergeant Major A. M’Gregor, Royal Scots, who was reported wounded and missing on 12th April, 1917, is now presumed to have died on or after that date.  Com-Sergt. Major M’Gregor, whose mother resides at 5 Temple Lane, had been in the army for six years, enlisting when he was only 17 years of age, and had been in France since the commencement of the war.  He had been four times wounded.  Prior to joining up he was employed in Belmont Works, Hawkhill (Thomas Bell & Sons, Limited).  Mrs M’Gregor’s other son, who has been in the army for 15 years is at present serving with the Royal Scots Fusiliers in France.

Can you tell us more about Alexander Murray McGregor'? Some additional facts, a small story handed down through the family or perhaps a picture or an heirloom you can share online. Contact our curator...