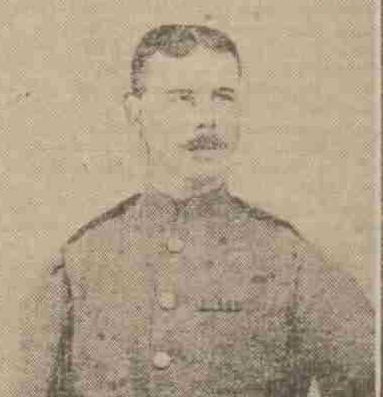 WHEN GERMANS EXPLODE A MINE.

A gallant Dundee H.L.I. veteran has been killed by the exploding of a mine.  He is Private John McGregor, whose wife and family reside at 38 Long Wynd.  Deceased who was called up as a reservist at the outbreak of war, had previously fought on the Indian frontier and in South Africa.  He was the possessor of the Indian campaign medal and also the two medals for the Boer War.

Intimation of her husband’s death is contained in a couple of letters sent to Mrs McGregor by comrades of deceased.  Private J. R. Gavin, D Company 2nd H.L.I., states McGregor, who was much liked in the company, met his death on the 6th inst., and the body had received proper interment near to where the battalion was in the fighting line.  The comrade tenders to Mrs McGregor the sympathy of the other members of the company in her bereavement, and remarks her husband was a good soldier and came by a soldier’s death.

In a letter which Mrs McGregor has received from Private Andrew J. Williamson the additional information is supplied that her husband’s death occurred about 8 pm. on the 6th inst., as the result of the Germans blowing up a mine. M’Gregor was struck on the head by part of the debris and killed instantly.

Deceased, who was a man of some 40 years of age, was in the employment of the Dundee Police Commissioners prior to rejoining his old regiment.  He is survived by a widow and three children.

Deceased’s widow has been married twice, and it is a noteworthy coincidence that her first husband was also a soldier.  He was Private Mudie, of the Black Watch, and towards the close of the South African campaign contracted enteric fever with fatal results.

Can you tell us more about John McGregor'? Some additional facts, a small story handed down through the family or perhaps a picture or an heirloom you can share online. Contact our curator...