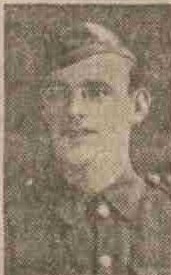 Pte. Frank McHugh, M.M., Black Watch, was killed in action on 28th July.  He had been almost three years in France, and had been twice previously wounded.  He was awarded the Military Medal on the field in 1917.  His wife and three children reside at 14 Carnegie Street.  In civil life Private M’Hugh was employed as a factory worker with Caird’s Limited.  Two of his brothers are serving in France, while other two have been discharged.

Can you tell us more about Francis McHugh'? Some additional facts, a small story handed down through the family or perhaps a picture or an heirloom you can share online. Contact our curator...