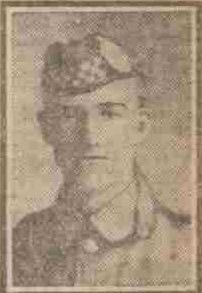 Private Alexander R. M’Intosh, Argyll and Sutherland Highlanders, died from wounds at a base hospital on 13th May.  Private M’Intosh, who was 31 years of age, had been ten months at the front, and prior to enlisting he was employed with Mr John M. Anton, butcher, Hawkhill, and resided at 272 Blackness Road.  He leaves a widow and two children, who are at present residing at 28 Yeaman Street, Forfar.  Deceased has three brothers serving one in France, another in Italy, while his eldest brother volunteered in Australia.

Can you tell us more about Alexander Redford McIntosh? Some additional facts, a small story handed down through the family or perhaps a picture or an heirloom you can share online. Contact our curator...