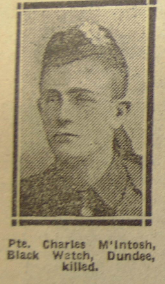 Charles has no known grave but is remembered on the Loos Memorial.

Private Charles McIntosh was among those of the 4th Black Watch who were reported missing after the battle of Loos in September last year.

Mr Wm. McIntosh, his father, who resides at 151 Victoria Road, Dundee, yesterday received the official intimation that his son was now reported as having been killed on that date.  Deceased was 21 years of age, and was previously employed in Hillbank Linen Works, Dundee.

Can you tell us more about Charles McIntosh'? Some additional facts, a small story handed down through the family or perhaps a picture or an heirloom you can share online. Contact our curator...