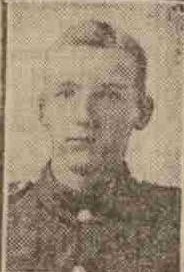 Mrs J. McIntosh, 5 Coupar’s Alley, Wellgate, Dundee, has been informed that her son Private Charles McIntosh, Seaforth Highlanders, has been killed.  Writing to Mrs McIntosh, an officer states :–“Your son was moving with his platoon from one trench to another when the enemy started to shell, and he was one of those who were killed.  He has been buried by the chaplain behind the lines.  Private McIntosh was a very good Lewis gunner, being the best man in his team.  On behalf of the company I offer you our deepest sympathy.”

Private M’Intosh enlisted in June last year, and had been at the front four months.  He was 19 years of age, and was previously employed with Halley bros., Ltd., hacklemakers, South Ward Road.  A brother, James, is serving with the Royal Engineers in France.

Can you tell us more about Charles Burgess McIntosh'? Some additional facts, a small story handed down through the family or perhaps a picture or an heirloom you can share online. Contact our curator...