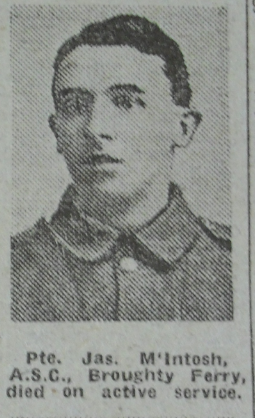 Pte. Jas. McIntosh, A.S.C. (27), son of Mr Elder McIntosh, King Street, Broughty Ferry, has died from pneumonia at Basra, Persian Gulf.  He had been almost four years away (having been at the landing on Gallipoli), and was in Palestine and Egypt prior to going to Mesopotamia.  This is the second son Mr McIntosh has lost, the other being Pte. William McIntosh, Royal Scots, missing, now presumed killed.  Both were bakers in Broughty Ferry.

Can you tell us more about James McIntosh'? Some additional facts, a small story handed down through the family or perhaps a picture or an heirloom you can share online. Contact our curator...