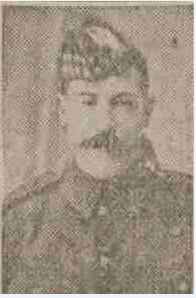 DUNDEE GORDON WHO IS KILLED

A widow and three children are left to mourn the loss of Pte. Thos. M’Intosh, of the 2d Gordon Highlanders.  The sad intelligence that he was killed in action on the 13th of March has been communicated by the War Office to Mrs M’Intosh, who resides at 31 Edward Street, Dundee.  It is only two months ago since Pte. M’Intosh left the country for France, having enlisted a month previously.  He had a considerable experience of military duty, however, for he served with the Gordon Highlanders for sixteen years, and this war was the third in which he had taken part.

Can you tell us more about Thomas McIntosh'? Some additional facts, a small story handed down through the family or perhaps a picture or an heirloom you can share online. Contact our curator...