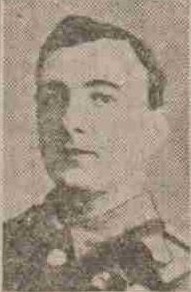 News was received in Dundee yesterday that John McIntyre, gunner in the R.F.A., had been killed by a shell.

His Captain writes that he was a good soldier, and that “he died for his country in the strict execution of his duty.”

His mother resides at 70 Church Street, Dundee, and his father is in Canada.  Deceased soldier was 23 years of age, and was employed prior to enlistment as a grocer by Mr D. Whamond, Hilltown.

Can you tell us more about John McIntyre'? Some additional facts, a small story handed down through the family or perhaps a picture or an heirloom you can share online. Contact our curator...