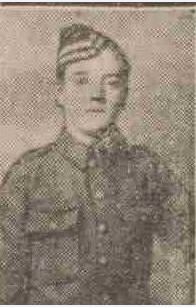 Alex has no known grave but is remembered on the Menin Gate Memorial. Alexander’s real name was Alexander Martin Ormond, but he served as McKay.

DUNDEE SOLDIER KILLED BY A SNIPER.

Intimation has been received in Dundee of the death in action of Private Alex. M’Kay, 1st Gordon Highlanders.  Writing to Miss Mary Anderson, a friend of the deceased, Lance-Corporal W. Brown says :—“Alex was with the bomb-throwers, and was shot through the head by a sniper, death being instantaneous.”  Nineteen years of age, Private M’Kay was a member of the machine-gun section of the battalion, and was formerly employed with Messrs William Lawson & Sons, Ltd., rope and twine manufactures, Dundee.

Pte. Ormond, was attached to the Machine Gun Section of the battalion, and sustained his wounds at the hands of a German sniper.  He was 22 years of age, and was previously employed by Wm. Lawson & Sons, Ltd., rope and twine manufacturers, Dundee.

Can you tell us more about Alexander Martin McKay'? Some additional facts, a small story handed down through the family or perhaps a picture or an heirloom you can share online. Contact our curator...